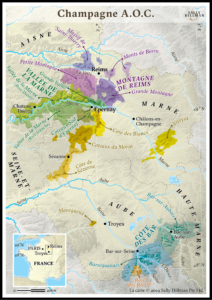 Translating to ‘the hillside of whites’, the Côte des Blancs is named after its white, chalky soils and its origin as the spiritual homeland for Champagne’s premier white grape varietal, Chardonnay. Spanning 20 km in length, there are 11 villages here: six of which hold Grand Cru status—an impressive proportion considering there are only 17 classified Grand Cru villages in Champagne. The total vineyard area is 3142ha, of which Chardonnay vines predominate (98%), followed by Pinot noir (2%). Most of the region’s vineyards are located on a long, continuous, east-facing côte (slope) that basks in the gentle morning sun. Topsoil is sparse, exposing a deep bedrock of pure and white Cretaceous chalk containing millions of fossilised sea creatures. The fortuitous amalgamation of unique geology, combined with cool climatic influence and dedicated viticultural experimentation, has resulted in the creation of a signature Blanc de Blancs (a champagne style made entirely of white grape varietals; here, Chardonnay) with distinct chalky minerality, mouth-watering acidity and a finessed elegance that is deeply rooted into this region’s identity.

And yet, like a far-branching family tree, each village in the Côte des Blancs produces Blanc de Blancs that can be distinguished from its neighbours. These stylistic nuances directly reflect the diverse exposures, soils and microclimates of each village, as well as the careful farming practices of grower-producers determined to let their hard-won terroir speak loudly for themselves.

In Part 1 of our feature on the prestigious Côte des Blancs, we delve into the north, highlighting four Grand Cru villages and one Premier Cru village. We introduce a few producers and their cuvées that exemplify or provide a fascinating comparison for a ‘model map’ of village typicity, upholding our firm belief that champagne is truly vin de terroir encapsulated. 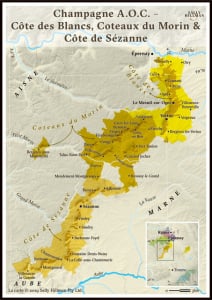 One of two northernmost villages, Chouilly is a Grand Cru village with a vineyard area that is notably detached from the main, east-facing côte. In fact, most of Chouilly’s favourable vines lie south of the village on the northern aspect of a large, free-standing hill, the Butte de Saran, which borders Chouilly, Cramant and Cuis.

The microclimate in Chouilly is warmer than any other village in the Côte des Blancs, owing to the moderating influence from the Marne River to the north. This, in turn, produces cuvées that are typically rich, expansive and exotic in style.

A wonderful study in Chouilly lies in Champagne Suenen’s Le Mont-Aigu 2013, crafted from a single parcel of low-yielding Chardonnay vines in Chouilly, near the Cramant border on the Butte de Saran. Topsoil is thin, allowing the old vines to extract intense minerality from the pure chalk soil below as fruit reach optimal ripeness, ultimately conveying a concentrated and compact expression of Chouilly.

A more accessible cuvée, Aurélien Suenen’s C+C NV is a blend of 100% Chardonnay from Chouilly (30%) and Cramant (70%)—the Chouilly personality is confident and unmistakeable here. While most parcels are north-facing in Chouilly, Aurélien’s vineyards have south and south-east exposures, resulting in ripe fruit that supports Chouilly’s rich and mature nature along with Cramant’s silky smooth spirit.

Located west of Chouilly, Cuis is a Premier Cru village at the northern edge of the Côte des Blancs, with a vineyard area that is also separate from the main, east-facing côte. Most vineyards face north and north-east, receiving less sunlight than the vines in the Grand Cru villages, resulting in a lighter style of Blanc de Blancs—pure and delicate, with a mineral-charged profile and firm acidity.

Adrien Dhondt of Domaine Dhondt-Grellet is a rising star of the Côte des Blancs, producing two Blanc de Blancs that demonstrate classic Cuis character despite different winemaking styles. Les Terres Fines NV is crafted from nine plots in Cuis, displaying gentle, fruity aromas bolstered by an intriguing vinosity that is attributed to the blending of reserve wine stretching back to 1986. In contrast, Les Nogers 2014 is a single-vineyard expression of old Chardonnay vines that lie on the north-western flank of the Butte de Saran, offering insight into the unique terrain of sandy-clay and chalk, and revealing luscious ripe fruit, silky complexity and a strong mineral stamp that is inherent to Cuis.

A Grand Cru village lying east of Chouilly, and bordering Cramant, Oiry is a small terroir with a total vineyard area of around 158ha that is also separate from the main, east-facing côte. In a village that contains more farmers than growers, Aurélien Suenen is currently the only vigneron producing a pure Oiry Blanc de Blancs, offering rare insight into a Grand Cru terroir never before seen in isolation.

Champagne Suenen’s Oiry NV is assembled from five parcels with north- and south-facing exposures, that Aurélien describes as a ‘global representation of Oiry’. Here, the Campanian chalk is compact, bringing a ‘tonicity’ to the cuvée—tense and electric with profound minerality and salinity. 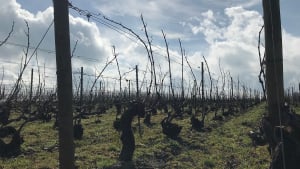 South of Chouilly lies Cramant, a Grand Cru village of 361ha with vineyards that stretch along the southern aspect of the Butte de Saran and then further along the main, east-facing slope of the Côte des Blancs. Parcels located on the Butte de Saran are largely considered to be the best terroir of Cramant, as they receive ample sunlight during the day.

The soil in Cramant is diverse (a mix of clay and chalk), as is its vine exposure, so the flavour profile tends to differ across cuvées even from neighbouring producers, resulting in an exciting array of possibilities. Nevertheless, a defining feature of Cramant lies in its concentration and creamy, silky smooth composure.

Adrien Dhondt produces a multifaceted expression of Cramant in his Cramant NV. Assembled from two contrasting lieux dits (single parcels of vines) that have opposing aspects and soils—La Garenne and Les Longes Verges (interestingly, this parcel is split between Cramant and Chouilly, and Adrien’s vines are located on the Butte de Saran hillside, with a western exposure)—Cramant NV paints a sweeping gradient of Chardonnay character from start to finish, revealing the quintessential Cramant touch with an appealing, creamy mid-palate.

Another Blanc de Blancs stemming from Cramant is Champagne Larmandier-Bernier’s single-vintage cuvée Vielle Vigne du Levant, with old vines located on the flanks of the Butte de Saran on a south-east facing slope. This cuvée is texturally rich, deep and complex. 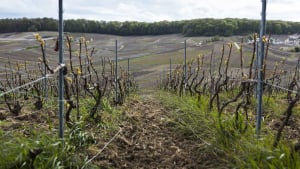 A Grand Cru village with most of its vineyards located mid-slope on the main, east-facing slope of the Côte des Blancs, Avize covers 268ha and is known for contributing power, structure, the most minerality, and occasionally austerity to Blanc de Blancs and other champagne wine styles. Similar to Cramant, Avize has diverse soils that are dominant in either clay or chalk, resulting in a plethora of expressions, with some producers highlighting the differences or combining soil types to illustrate their vision of Avize.

A vintage Blanc de Blancs from Champagne Agrapart, Avizoise is assembled from two parcels in Avize with the same geological profile of clay-rich topsoil over chalk. The result is a voluptuous cuvée that preserves focus and elegance from terroir-driven minerality.

Another offering from Pascal Agrapart, Complantée NV comprises six of the seven permitted grape varieties in the appellation, co-planted and hand-harvested together from a single parcel in Avize. An exceptional field blend, Complantée NV is racy and refined, with enthralling minerality and chalky undertones; a cuvée that is absolutely definitive of the all mighty Avize.

While these cuvées are all excellent examples of champagne wine styles from the esteemed villages of the northern Côte des Blancs, they by no means exhaust this region’s greatness. We invite you to explore these terroir expressions as we build upon our database with more producers and cuvées further afield. The power of knowledge, shared with the magic of Champagne, is simply irrésistible.

*Cru indicates a group of vineyards belonging to a specific village in Champagne. There are 17 Grand Cru villages followed by 42 Premier Cru villages in Champagne. Established in 1911 as a formal ranking to fix grape prices, Houses eventually began negotiating directly with growers in 1990, leading to the abolishment of Champagne’s classification system in 2010. Nevertheless, the terms Grand Cru and Premier Cru can still be used on champagne labels. 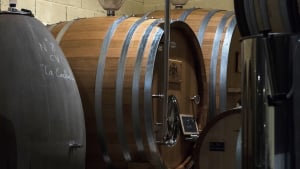 a ‘foudre’ at Champagne Suenen 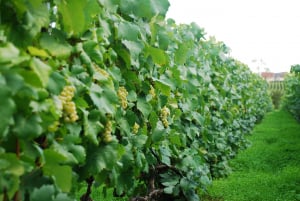 While the wines in the north of the Côte des Blancs tend to be richer, those in the south are typically tense and electric with

Images just in from @champagnepierregerbais who ha

In our latest Le Journal article, Journey to the C