‘The difference between good wine and great wine is [in] the details’, Aurélien Gerbais, 8th generation grape-grower and 4th generation winemaker of Champagne Pierre Gerbais, explains in earnest. And so, it is with this meticulous approach to winemaking, respect for his ancestors’ innovative vision and the unique terroir upon which the House sits, as well as the passionate pursuit of sustainability of this land, that a small Domaine has achieved such great heights that can only continue skyward. 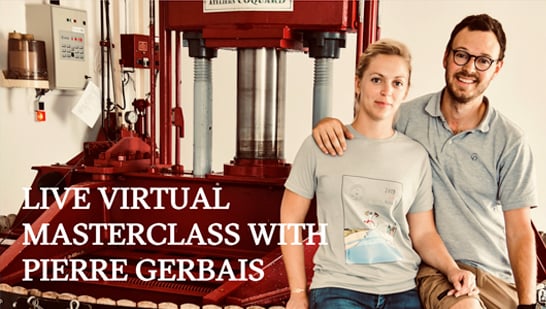 Play Video
Discover more about the visionary House of Champagne Pierre Gerbais and their masterful cuvées.

The House and vineyards of Pierre Gerbais are located in the village of Celles-sur-Ource in the Côte des Bar. Of the four main growing regions of the Champagne AOC, Côte des Bar is the southernmost and contributes a quarter of the region. Chardonnay, Pinot noir and Meunier make up 99.7% of Champagne’s total production, with the remaining 0.3% comprising the four ‘rare’ or ancestral white grape varieties of Pinot blanc, Fromenteau (Pinot gris), Arbanne and Petit Meslier. Of these, Pinot blanc constitutes the highest percentage and is mostly cultivated in Celles-sur-Ource. Here, Pierre Gerbais owns the highest proportion of Pinot blanc, with over 4ha of vines, as well as the oldest Pinot blanc vines, at over a century old.

To understand the estate and terroir, one must reach back into the history books to a time when the Côte des Bar was part of Burgundy, before the French Revolution. Located just 10 km from the border of Burgundy, which has similar soils, viticulture in the Côte des Bar was heavily influenced by its neighbour, and red wine was historically the main production. Today, the Côte des Bar almost exclusively specialises in Pinot noir, which constitutes around 84% of the region’s total vines; the remaining growths are Chardonnay, Meunier and the aforementioned ‘rare’ varietals. Within the Côte des Bar is the village of Celles-sur-Ource, which is uniquely positioned at the nexus of four rivers and valleys, resulting in a climate both humid and frost-prone. It is here that the ‘rare’ varietal Pinot blanc came to eminence, being more resistant to these conditions than Chardonnay and Pinot noir.

Aurélien’s grandfather, the eponymous Pierre Gerbais, received three little plots across 0.4ha as a wedding gift which, in turn, catalysed the family’s transition into focussing solely on champagne production. From these humble beginnings, Pierre continued to experiment and devoted his entire life to selecting terroirs with diverse personalities in Celles-sur-Ource. He discovered that specific vines in specific soils would yield the best results—white soil for white varietals and brown soil for Pinot noir. The House now holds a total of 20 plots across 17.5ha, composed of 50% Pinot noir, 25% Chardonnay and 25% Pinot blanc. Pierre, now 90 years old and alert as ever, still walks the vines every day.

Mirroring Pierre’s unwavering pursuit for quality and respect of the environment, his son Pascal converted the domaine to organic cultivation and became AMPELOS certified in 1996. The objective is to cultivate the best grapes possible—naturally—focussing on biodiversity in the ecosystem in such a way that this has a positive effect on the vines. Half of the House’s wines are made without added sulphites, and this practice demands the healthiest grapes and the most precise winemaking to be successful.

Aurélien, Pascal’s son, joined the House in 2009 and continues to uphold his forefathers’ legacy in innovation and excellence while making his own indelible mark on the Domaine’s cuvées. His goal is to be precise in all aspects of growing–producing, from pruning to the barrel, to allow for simpler winemaking without the use of chemicals. The year’s work is labour-intensive, and the House employs 33% more pickers than other Estates during harvest, with fruit going through two selections for quality control before arriving at the pressoir. Aurélien likens the approach to a chef: ‘if the meat, fish and vegetables are good, then you don’t need a lot of things to have a good meal’, elaborating further: ‘the more you are natural with the vines, the more you will feel it on the grapes and on the juice’.

Without further ado, it is with great honour and immense pleasure that we introduce the following exciting and terroir-driven cuvées of Pierre Gerbais.

Grains de Celles, bottle and magnum: this is the bottle incarnate of Pierre’s life’s work in diverse terroir selection, and an exact representation of the domaine’s holdings. It comprises 50% Pinot noir, 25% Chardonnay and 25% Pinot blanc from all of the House’s 20 plots.

Grains de Celles Rosé, bottle and magnum: an accessible and fresh rosé made from an assemblage (‘blend’) of white and red wine. It is based on the Grains de Celles, with the addition of 5% Coteaux Champenois Rouge.

L’Originale, bottle: the most famous cuvée of the House, a Blanc de Blancs composed of 100% old-vine Pinot blanc from Les Proies (being planted in 1904, these are the oldest Pinot blanc vines of the region). Crafted in 1996, L’Originale was the first of its kind in Champagne, as reflected in its title.

L’Osmose, bottle: a Blanc de Blancs cuvée composed of 100% Chardonnay from two plots that face each other.

L’Audace, bottle: a Blanc de Noirs cuvée composed of 100% Pinot noir from 70-year-old vines of the lieu-dit, or single-parcel, Sainte Marie, with no sulphites and zero dosage. Created by Aurélien, L’Audace was one of the first cuvées to be made without sulfites in Champagne AOC. Like the Rosé de Saignée, it is ideal for food pairing.

Coteaux Champenois Pinot Blanc, bottle: a still white wine from 100% Pinot blanc with some skin maceration, heralding from the same plot as L’Originale.

And so, through the lens of a wine glass, it is our belief that each cuvée provides a clear perspective into the House’s philosophy, personality and passion, both past and present, and into the future.

PrevPreviousGrower champagne – a wine that should be treasured and celebrated.
NextUnlocking the Secrets of Champagne in a Tulip GlassNext 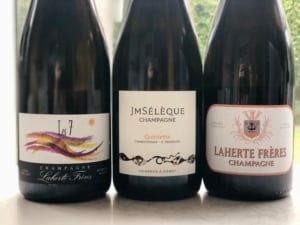 ‘Hey, did you ever try dunking a potato chip in champagne? It’s real crazy. Here—isn’t that crazy?’, chirps Marilyn Monroe, dipping a chip into a 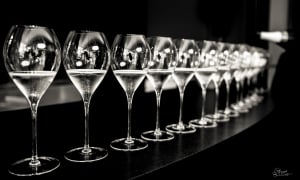 Unlocking the Secrets of Champagne in a Tulip Glass

Just as wine can elevate a meal, so too can glassware greatly enrich the Champagne experience. The adage of ‘eat and drink what grows together’

Champagne is a truly paradoxical wine, which is pe

While we love the idea that the champagne coupe wa

‘Hey, did you ever try dunking a potato chip in

Let us make your gifting easy and fabulous! Our l

Just as wine can elevate a meal, so too can glassw